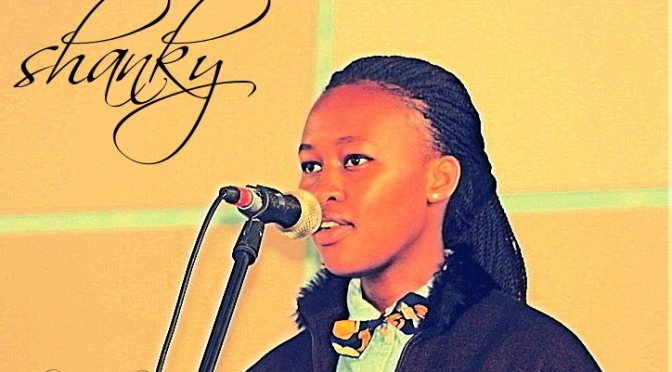 My keyboard is an epitome of aridity. With all the consonants I still can’t make up words right enough to describe what I have in mind. And my mind is still not able to fully perceive what the maker of this lovely planet unfolded before my eyes today. How am I going tell this story? Simple, I am going to close my eyes and scribble anything related to this event on a page in any language that my tongue can roll to. That said. Where do I begin?

Africa U Night, the event that had trended (maybe is still trending) on twitter since the week began was finally here. Mavuno church was the destination and if you had never set a foot there like me there was an option-you could miss lunch and begin your search for the venue much earlier lest you miss some of the performances. To be honest, events will come and go but Africa U Night will still remain as a reminiscence of what good poetry is all about. For the first time I saw poetry escape the lips of the talented poets, hover in the room and finally encaving us in some sort of a dome filled with euphoria and bitterness. The event presented by the ARTEAST HUB had much more than just poetry. I tell you the poets deserved the tittle not as common these days when anybody who can create simple rhymes like Embrace and Empress call themselves poets. They had content and nobody had to be told to listen- the words themselves were powerful enough to arrest the attention of the audience and journey with them in that poetic adventure. There was also music. I still can’t compare the vocals of PHY to any other artist. She is the Kenyan Version of Emeli Sande.

Fast forward, the first performer was Le chatelier and it seemed the price of disappointing the audience was too high for him to afford. His comprehension of the Queens language was exemplary. His piece was short and very informative. The MC Poeta equaled the task shooting his sick punch lines in the name of Kujichocha. You just had to pendaa his stuff.

Vanessa Ombura took the stage and froze the audience to a pin drop silence. The words strictly lined with the theme left the audience screaming at the end of the performance. Poeta had to beg the audience to stop screaming such crazy chants like Thitima! Thitima! And allow the next poet to take stage.

L7 Empire is a cohort of Murderers-they killed it

Comprising of four artists: Virusi Mbaya, Cilabies Mgonjwa, Muarab and chief Kaddif, L7 Empire is taking Kenya by storm. Their lyrical prowess is out of this planet added to their sound content and mastery of their pieces-you get a free ticket to wonderland and they are not bragging about it!

They performed two pieces mheshimiwa usinigei doo that spoke of all the ills that we Kenyans are subjected to by the so called waheshimiwa. The other piece: bila madeni mafan wanatudai that spoke of the contributions of artists in fighting the societal ills. L7 empire will continue to rule because of one thing, they speak of the problems we encounter everyday not only in Kenya but in Africa. Their choice of words is excellent they use words so weighty!

The only prince in the ghetto, Ronny proved he is no longer a poet but a prophet. He prophesied that soon Obesity will also be a disease in Turkana. He also echoed the cries of the real Kenyan heroes felled by political bullets: TJ Mboya, Pio pinto, Robert Ouko and JM Kariuki. He prophesied that soon the hunger of these fallen heroes will be over as they will be served justice. Where do people get such creativity? Maybe only prophets like Ronny Prince are able to create such powerful words out of carcass of fallen heroes.

Shanky Abbs and Shikz proved they are not merely pretty but are pretty creative. Forget about the serenity in their dressing that depicted true African women. Their performances took us to a soul hunting mode. You only realize you didn’t carry your hunkies after such a performance. Tears rained and reigned.

The event was one of its like, an event worth every cent and second spent. Even after spending part of my time reporting about this event I still believe I should apologize to all the artists who performed everybody who attended this event and the Arteast Hub for failing to find the appropriate words to tell all about this event. In short the artists frankly lit the room with words. Set it ablaze.

Finally today being siku ya mashujaa I celebrate the following poets as my heroes:

L7 Empire Crew, Shanky Abbz, Ronny Prince, Le Chatelier, Vanessa, Poeta, Femi, Shikz, Vince, Murathe, Kennet B and many more. I celebrate you as my heroes because you have been the light of this society, always rebuking the wrongdoings of our leaders without fear while embracing the efforts made by fellow citizens to rebrand Kenya. May you live long to inspire the next generations.